Get fresh music recommendations delivered to your inbox every Friday.

Sprinting Gazelle - Palestinian songs from the Motherland and the Diaspora 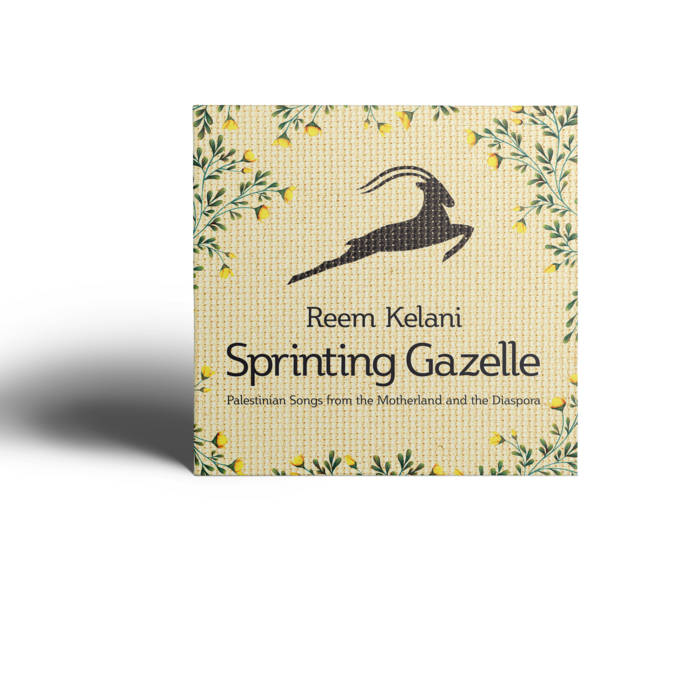 Considered as one of the foremost researchers and performers of Palestinian music, Reem Kelani brings you ‘Sprinting Gazelle – Palestinian Songs from the Motherland and the Diaspora.’ Some of the songs on the CD are Reem’s research and arrangement of traditional (and some very old) Palestinian songs; the others are her own musical settings of popular and resistance poetry by the likes of Mahmoud Darwish, Salma Khadra Jayyusi, Rashid Husain and Mahmoud Salim al-Hout.

Other artists on this CD include: Armenian duduk player Tigran Aleksanyan (playing the ancient and haunting Palestinian double-clarinet the yarghul); film-composer Dirk Campbell (who lends his string arrangements and nay playing); Salah Dawson Miller (on Arabic percussion); Paul Clarvis (on drums and frame drums), and Sonia Slany with her Solid Strings Quartet.

Reem Kelani sees her project as a means of demonstrating the fact of the Palestinians’ existence, now and in the past. She views her musical journey as both historical and political, personal and collective. She seeks to point out suffering and to highlight celebration. Her journey is a musical one through the written and oral history of a people who are proud of their collective sense of poetry, stories, music and existence. This is manifested in the detailed accompanying booklet which includes introductory notes for each song, lyrics in Arabic and English, and a comprehensive glossary of musical and cultural terms.

Leon Rosselson of Fuse Records offered his advice and his record label. This gave Reem the opportunity to produce the CD herself, thus maintaining her musical and cultural integrity and her independence. Raising the necessary funds for the project was by no means easy, but with the help of friends, family and supporters, the CD was finally made. It took two years in the process and is the culmination of more than 20 years of effort and hope.

Enjoy your journey with the Sprinting Gazelle!

* The Musicians: for playing with me and helping me through difficult moments.
* Leon Rosselson & Fuse Records: for supporting and advising me in the realisation of this project, and for giving my music this platform.
* The Sponsors: for rallying to help fund this CD. I remain forever indebted to you:
- The Afyouni Family (Wahib, Lubna Kelani, Heba, Suha, Sa'eed & Hana)
- Tom Clark
- Jamil & Khalida Habbas
- Yousef Kelani
- Stella Somes-Charlton
- The Stoat
* Steve Lowe: for your expertise, guidance, patience, 'clean' ears & true Northern soul. Bolton lives!
* Gurjit Dhinsa: for constantly reminding me that Truth is Eternal through your efficiency and your smile.
* Sara McGuinness: for introducing me to Steve, Gurjit & Gateway Studio.
* Salma Khadra Jayyusi: for your undying support, faith and invaluable literary (and other) advice.
* Susannah Tarbush: for assistance in securing funding and for your neighbourly spirit.
* Jo & Tess McEvoy, The Carlton Tavern, Maida Vale: for rehearsal space and your Irish hospitality.
* Ibrahim Shteiwi, lead choreographer, Al-Baidar Folklore Band (Jordan & Kuwait): for being a dedicated dabkeh teacher, and for arranging for the yarghul & mihbash instruments on this CD.
* Zoe Rahman: for introducing me to your warm family and to wonderful musicians along the way.
* Sima Bina: for providing genuine cowbells from Khorasan in Iran for use in the 'Cameleer' song.
* Nada Irani: for happily taking on the demanding design of the sleeve notes with enthusiasm, creativity and conviction.
* Anissa Helou: for your help in converting the poetry from Arabic Word into Quark on the road to Marrakesh!
* Bayan Nuwayhed al-Hout: for your prompt help in putting me in touch with the family of the late Mahmoud Salim al-Hout.
* Tony Edwards & Travers Symons: for your help and legal advice, both on and off the hockey pitch.
* Makram Khoury-Machool & Kate Daniels: for your help in translating legal documents.
* Adila Laidi: for your faith in the role of music and the arts in Palestine.
* Penny Bateman, Ben Burt, Shelagh Weir & Helen Wolfe: for welcoming me into the Palestinian Costume Exhibition at the Museum of Mankind (British Museum) between 1990-1992, and for the resulting friendships.
* Christopher Somes-Charlton: for your companionship, respect, support & knowledge.
* Safa' Ali Abdul Mon'em: for your unconditional love & friendship all these years.
* Friends of my youth in Kuwait: for enriching my formative years.
* The Kelanis & the Zu'bis, my paternal & maternal families respectively: for feeding me with a bittersweet sense of our 'collective' in Ya'bad, Jenin, Nazareth, Nablus, Palestine, Jordan, & elsewhere.
* Ayman, Hoda, Heba, Emily, Olivia, Suha, Sa'eed, Lily, Yasmin, Hana, Bruce, Zain & Bader: for teaching me how to be your Auntie, Khalto & 'Amto.
* Amin & Dalia, Angus & Sally, Antonia, Higgins, Jamie & Sue, Jenny, Kamyar & Maha, Martin & Sana, Nabil & Chahnaze, Phil & Jayne, Randa, Samar and Valma: for your loyalty & friendship.
* Massimo, Mary, Gill & Esmeralda: for your faithful care & sympathy. Grazie, Thank You & Gracias!
* Moustapha Akkad, Maha Barakat, Judith Dawes, Anthea Mander-Lahr-Coles, Michael Prior, Yusif Sayigh, & 'Khalo' Faisal Zu'bi: for leaving an unforgettable impression on my life and work, each in your own way.
You all journeyed from this world during the making of this CD. May you rest in Peace.

Bandcamp Daily  your guide to the world of Bandcamp